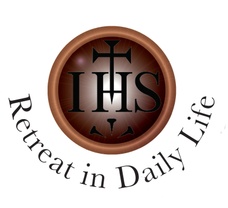 St. Ignatius Loyola was born, Inigo Lopez de Loyola, in 1491, the youngest of 13 children of a family of minor nobility in northern Spain. As a young man Ignatius Loyola was inflamed by the ideals of courtly love and knighthood and dreamed of doing great deeds.

In 1521 Ignatius was gravely wounded in a battle with the French. While recuperating, Ignatius Loyola began reading about the lives of Jesus and the saints and Christ. This made him more devout and happy, it aroused desires to do great things in him. Ignatius realized that these feelings were clues to God’s direction for him.

Over the years, Ignatius became expert in the art of spiritual direction. He collected his insights, prayers, and suggestions in his book the Spiritual Exercises, is one of the most influential books written on the spiritual life.

Ignatius Loyola founded the Society of Jesus, or the Jesuits. In 1540, Pope Paul III approved the order.  Ignatius conceived the Jesuits as “contemplatives in action.”

Today, the Society of Jesus is known for its work in educating the youth around the world. Several universities have been founded in the name of Ignatius and in the traditional Jesuit spirit. The Jesuits also perform many other important works around the globe.